Christmas is not my best time of the year. But with peoples orders I get to stay busy and make something that will make others happy.

I finished all my rock work for peoples Christmas gifts. Thought I'd share some with ya. 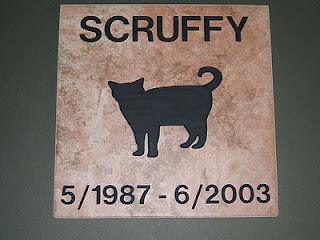 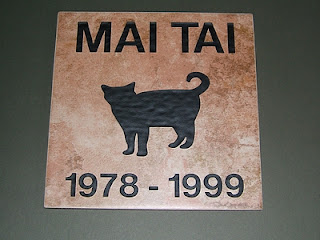 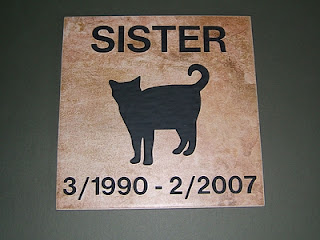 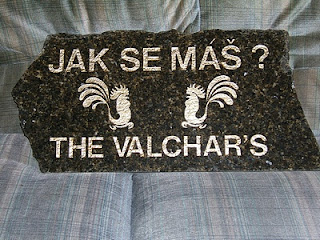 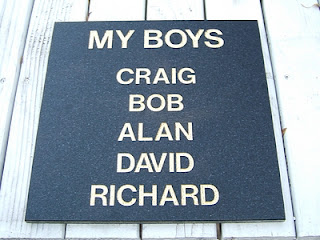 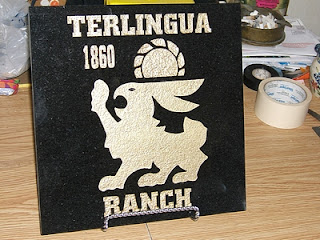 Now that I have finished these maybe get back to some glass blasting. 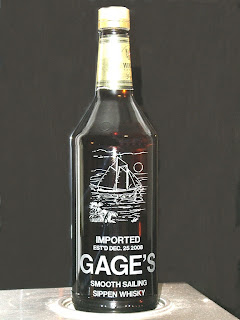 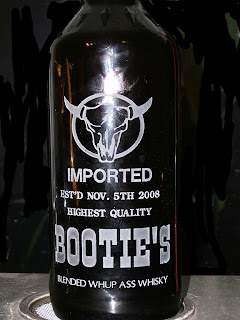 I buy the whisky and take the lable off and blast what ever people want on it.
Hope everyone had a great Christmas and has a HAPPY NEW YEAR.
Posted by Jim at Tuesday, December 28, 2010 1 comment:

IT'S A MAN THING

IT'S A MAN THING

About 2 weeks ago, I was looking around the Web for the BIGGEST sky
rocket that I could get shipped to me via common freight carrier.  I
located a fireworks importer in Wisconsin who had this mondo sky
rocket--biggest thing I had ever seen--called a Sky Dragon.  These things
are 48 inches tall and are mounted on a 1/2-inch wooden dowel. Pure
aerospace engineering.

I plopped down a bunch of money and had him send me two cases of these
things.  They arrived at the freight dock a few days ago and I had to
drive the van over to pick them up.   Two boxes each 2 feet by 2 feet by 4
feet in size containing 80 rockets each.   The 'Class 4 Explosives'
sticker on the side of each box was a real bonus.  I am gonna have to save
them for the scrapbook.

That night, me and the kiddos had a gen-u-ine rocket launch ceremony. I
placed one of these beauties in a liter-size glass bottle and the bottle
fell over.  Hmmmm- this thing was waaay too big.  I looked around the shop
for a pipe to set it in, but realized that the only dirt I could drive the
pipe into was in plain sight of my neighbor's house.  I knew he was a cool
guy, but I didn't want him to call the cops.  You see- 'projectile-type'
fireworks are totally illegal in this county.  I was surprised that the
Buncombe County Sheriff Department wasn't waiting for me at the loading
dock when I picked these things up.  Anyhow, I finally rigged a launch pad
by prying up one of the driveway drain grates with a crowbar and sitting
the stick into the deep pit.  Looked sorta like an ICBM silo with its
hardened lid slid aside.

I asked which of my three kids wanted to light the fuse, but all took a
few steps back and politely declined.  Chicken shits.  Kids just aren't
made the same nowadays.  They fulfill their danger quotient by shooting
bad guys in video games.  About as far from real danger as you can get, if
you ask me.

I told the little weenies to stand back as I bent to light the device
with a Bic lighter.

The lady at the fireworks importer promised me that these things would
NOT make any noise.  I told her that they HAD to be relatively quiet so I
could shoot them off in my neighborhood without causing 'undue alarm'. She
said I wouldn't have any problem.  I emphasized the particular legal
problems I would have if  there were any type of loud report at apogee.  I
emphasized the fact that I lived right next to a National Park and that
any type of firework that was discharged or assumed to be discharged on
that property would get me sent before a FEDERAL judge right before I got
sent to the COUNTY judge.  She again assured me I would have no problem.

That rocket engine had a burn time about as long as any I had EVER seen,
and the ascent echoed off the surrounding trees.   Diamond shock pattern
extended from the back end.  It kept going and going and going.  When it
hit apogee at about 1000 feet,  the rocket disintegrated into a huge
shower of silent red sparks.  Pretty cool, I thought......until the shower
of sparks burned out and suddenly transformed into a cloud of extremely
bright and loud explosions. The kids scrambled into the back door 'Three
Stooges' style (ie where all three try to get through the same closed
door at once) and left me standing in the smoking haze waiting for the
cops to arrive. The dogs that live along our street were all barking their
heads off at the apparition they had just witnessed in the night sky

That ended the fireworks test for the night.

The next day, my oldest son Doug and I decided we were gonna 'neuter' one
of the rockets so it wouldn't make any noise.  I took him into the closet
where I store the gardening tools and he saw these two huge cases of
fireworks standing there.  The kid went nuts.  He wanted to open BOTH
boxes so he could see what all 159 rockets looked like lined up next to
each other.  This kid has promise.  I told him "Since mom only thinks I
have a few of these things lying around, maybe that wasn't such a good
idea."  He mulled that over for a few seconds, then gave me a real big
smile in agreement.

We pulled one of the rockets out of the box and re-locked the closet
door.

He and I both sat down on the driveway and proceeded to take it apart. It
was a standard issue big-ass Chinese sky rocket.  I bet they used these to
kill people 500 years ago.   As I sat there taking layer after layer of
paper off, his brain was filling with the details of construction. Tissue,
cardboard, plastic, fuses...etc. Realizing that he was mentally storing
the design for some future project sorta made me shudder.    All I was
thinking was the fact that this thing was probably put together by a
political prisoner in a hellhole somewhere who is probably gonna get
'executed' so they can sell his internal organs on the transplant market.

Probably not too far from the facts, but I managed to do a bit of
explaining to him from the standpoint of aerospace engineering regarding
how the thing worked.  Doug is probably the only 4th grader in the U.S.
who can now describe the principle of thrust using a control volume model.

The rocket was pretty simple.  It had a very large booster engine topped
with a warhead that contained the red sparkly things that exploded.
Removing the warhead was as simple as giving a quick twist, and I assumed
the neutered rocket would fly higher without the payload.  I was correct.
Doug and I did a daylight 'stealth' test and were able to add about 50% to
the altitude attained the previous night.  We decided to modify four more
rockets and put them aside in the closet for easy access.  When this was
done, Doug had a jar full of stuff that came out of the warheads
including 12 fuses about 3-inches long each, some paper, 4 plastic
nosecones and a big handfull of these little black balls about the size of
12-gauge buckshot that turned out to be the 'red sparkly popper things'.
It appeared that the outer layer was a simple gunpowder coating designed
to quickly burn off as red shower of sparks.   I surmised that the inner
core had some kind of magnesium thermite that gave off an intense white
light and a loud bang.  Pretty cool if you ask me.   Lots of energy packed
into one teeny little ball.

I didn't want to see the popper thingies go to waste, so I told Doug we
were gonna put them in a hole in the ground and set them off.  He gave me
another big smile.

It's amazing how kids think alike...even when separated by 30 years.

As I was digging a shallow hole with my hand, Doug asked if it would be
alright to put an army man next to these things so that "When they go off,
it would look like he was getting shot with a maching gun".
Dang....exactly what I was thinking.  I agreed and he ran off to his room
to dig something out of the mess.  He returned in about 3 seconds, out of
breath and  holding a cheap plastic imitation of Robert E. Lee on
horseback and a Civil War cannon.  I pointed out that they didn't have
true machine guns in the Civil War, but we would overlook this for the
purpose of the demonstration.  He handed me the action figure and I placed
it and the cannon next to a rather large pile of black beads from which a
few of the fuses extended.

I figured that three inches of fuse would take 2 seconds to burn, so I
had at least that amount of time to stand up and take a few steps back.  I
neglected to recount the night before.....when the warhead ignited
IMMEDIATELY upon reaching apogee.  Tricky Chinese.  They had installed
extremely fast-burning fuse in these things and that fact totally escaped
me.

I squatted next to Robert Lee and gave a short eulogy.  Doug laughed. I
took the trusty Bic lighter and placed it next to the fuse.  One flick got
the lighter going and THIS IMAGE IS ONE I WILL REMEMBER FOR A LONG TIME.
My hand holding a lighter next to a pile of explosives.

There is usually a short but noticeable mental pause that occurs
immediately before something bad or really stupid happens.  It is where
that little voice in your head says "You dumbass."

The fuse burn time was in the 1/1000ths of a second range.   The pile of
little popper thingy's immediately ignited into a tremendously brilliant
ball of fire.  All I could think was ..."...th....th.....thermite..."
Unfortunately, when they are viewed at ground level, these little popper
thingies become REALLY BIG POPPER THINGIES and have a tendency to jump up
to 15-feet in every direction from their point of ignition.  I
instantaneously became engulfed in a ball of fire that sounded a lot like
being in a half-done bag of Orville Reddenbacher's popcorn.

It was all over about as fast as I could snap my fingers.

After the smoke cleared, Doug started laughing his butt off.  That meant
I was still in one piece.  Doug does not laugh at dismembered limbs.   He
said I jumped about 10-feet, an action that I do not remember.  I checked
my clothes for burn marks, and found none.  He checked my back to make
sure it was not on fire.  No combustion there.  The driveway was peppered
with black holes where the concrete had been scarred from these things.

A close one.  Another REAL close one.  My mind ran the tapes again to
re-hash what it had seen.  All I remembered was being inside something
akin to a 30-foot diameter........flaming dandelion.  Whew.

Instead of a machine-gun peppering, he got nuked.   He and the horse he
rode in on.......and his cannon too.  One side was untouched, but the
other side was arc-welded.  Real warfare.  Doug examined it real
quiet-like and then started laughing again.

I assume he will remember the finer points of the lesson as he grows
older. When I now speak of 'almost being burned beyond recognition' he
will have a slightly better understanding of what I mean.  I hope that
this vivid image tempers the knowledge he now has regarding rocket
construction. O well.  After all, if your dad isn't gonna teach you how to
get your ass blown off, who will?
Posted by Jim at Tuesday, December 21, 2010 3 comments: