Bastrop County, Texas (AP) ? While the recent Texas wildffires may have destroyed much in the way of landscape and livelihood, they have also revealed a treasure trove of artifacts from ancients who inhabited the area.In fact, the Bastrop Country Complex Fire is credited with what is now considered to be the largest cache find of stone artifacts ever discovered in Texas?.a total of 4,112 items. Appproximately two months after this devastating fire scorched 34,068 acres, a landowner walking a ridgeline noticed a small opening in the rocks that she had never seen. Previously hidden by Cedar and Pines trees, the cave entrance was now visible to Faye Bell of Bastrop. Curious, Bell investigated this small opening and peered inside. The only thing obvious at the time was that it was not a small cave and she left it alone. The next day, Bell brought her neighbor Ima Fibherr to explore. What they found was extraordinary?ceramic pots lining the cave walls filled with fflint arrow points and knives, obsidian disks the size of pancakes and carved shell masks.The two recognized the significance of this discovery and contacted authorities. Since November 2011, many professionals from various veins of science have studied the findings. Two large ceramic vessels contained the majority of the flint artifacts. One was filled completely with 783 Perdiz arrow points, a form that occurred across Texas in the late Prehistoric period. The second ceramic pot contained 83 Harahey knives, which are believed to have been used in the processing of buffalo.Several other items not common to Texas were also found ceremonially stored in the back of the cave; obsidian anciently sourced from the mountains of Idaho, marine shell masks from the Atlantic and Gulf coasts and Bolen points crafted from coral. Two of the shell masks had the ‘weeping eye’ design etched into the outer faces, a trait more commonly found in the Mississippi river valley.Much study has occurred over the past few months and research is being published. The April issue of the Journal of Kiowa Ethnology details this remarkable find in a series of 394 images. A report from the Scientific Paleontology of Old-world & Occidental Flintknappers due out this summer will attempt to prove that all of the Perdiz point were crafted by the same artisan. And the Professional Research Archeologists of Northern Kansas will present findings that show some of the lithic material used was quarried from Kansas. Lastly, the Georgia Archeological Group will show comparisons of the shell masks with examples discovered in Georgia.Arrowheadology will post a follow up on this story on Monday, April 2, 2012.
Posted by Jim at Wednesday, April 04, 2012 4 comments:

Been cleaning up around here, I think I'm a hoarder, anyway I found this. 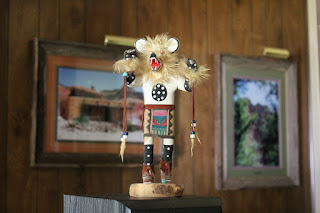 I read another blog that ole Billy Bob has and he posted a picture of him & this big bass he caught, 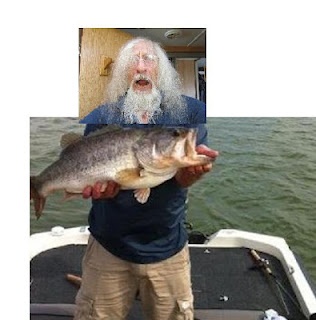 Now ole Billy Bob is a good looking ole boy I guess, I ain't no female you know, however if you blow that first picture up some, there might be some resemblance there. I just might have found a long lost cousin of ole Billy Bob. So Billy Bob if you read this and it is kinfolk just let me know what this fellers name is and we'll take good care of him for you.
Now I got to get back to cleaning no telling what else I might find.
Posted by Jim at Monday, April 02, 2012 2 comments: